Understanding Exposure To The Right (ETTR)

Exposure To The Right (ETTR) is an increasingly popular, commonly misunderstood photography topic. If you understand the reasons ETTR optimizes "exposure to the sensor" you can get better image quality from your camera.

Exposed To The Right

Exposure to the right (ETTR), in principle, means "let your camera measure as much light as possible while the shutter is open so you'll have better image data to work with after the shutter is closed".

Specifically, exposing to the right means using camera exposure settings (aperture and shutter speed) at base ISO (your camera's lowest ISO setting that's not "expanded ISO") so the brightest part of your scene is recorded as bright as possible. This causes the histogram of the recorded RAW file to shift to the right as far as possible, hence the name.

If you only shoot JPEGs and just want some quick image-improvement advice, here's a "too long; didn't read" summary:

TL;DR: When shooting JPEGs, keep the ISO setting as low as possible when that choice is available. You can gain extra ETTR benefits by shooting RAWs and taking advantage of image-processing flexibility your RAW conversion software provides.

If you have some stick-to-itiveness and especially if you're willing to post-process RAW files, understanding ETTR will help you improve your photography.

It helps to start with knowing that a digital camera's sensor hardware only has one digital-film speed. When some book or website says "adjusting the ISO changes the sensitivity of the sensor" it's wrong. A sensor's light-measuring sensitivity cannot be adjusted.

Your digital camera's sensor has millions of tiny light-measuring photosites. Each individual photosite -- each dot, because there are (typically) four dots per image pixel -- has a fixed sensitivity to light and therefore a fixed light-measuring capacity. This capacity has a name: Full-Well Capacity.

Photons of light arriving onto a photosite after full-well capacity has been reached are not measurable. This is why clipped ("blown") highlights are not recoverable.

Optimizing the amount of light that reaches the sensor's photosites means you want as much exposure as possible, but not too much. Here are some reasons:

Exposure and Measurement Are Only The Beginning

Cameras measure light while the shutter is open, then transform the measured values in various ways. Here's the order of operations that lead to a digital image file: 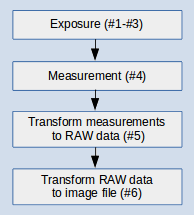 #1 through #3 are exposure. Exposure settings on your camera change aperture and shutter speed. Flash, by increasing luminance, also increases exposure.

Opportunity for #4 happens once. Anything that happens after the shutter is closed and the light has been measured is manipulation of the measured values.

Raising the ISO setting above base ISO affects #5 (when signal is amplified) and/or #6 (when a different tone curve is applied). These transformations happen after the shutter has closed and the light has been measured.

Transformations that happen in #6 are accomplished either by the camera's JPEG engine or by RAW processing software. By now it should be obvious that converting RAW data to image-file data cannot possibly change exposure.

Notice that the ISO setting is not an exposure setting. The ISO setting influences final image brightness but it cannot possibly change exposure, nor can it adjust the sensor's inherently non-adjustable light-measuring sensitivity, to accomplish the brightening.

JPEG and RAW Are Different

To take full advantage of ETTR you need to shoot RAW rather than JPEG.

When you're shooting JPEGs, ETTR is severely limited because of the way cameras' JPEG engines transform RAW data into JPEG image data. The transformation is irreversible because bit-depth is reduced from the bit-depth of the RAW data (12 bits or more) to the 8-bit depth of the JPEG image.

When you're shooting JPEGs you can increase exposure to the sensor by keeping the ISO setting as low as possible whenever that choice is available. Adding luminance to the scene using flash or a reflector will also increase exposure. Either way the extra exposure shifts the (imaginary) histogram of the light that was measured to the right.

It helps to think of "more exposure" as "more light reaching the sensor" rather than "brighter image". Raising the ISO can brighten the image, however in 'P', 'A', and 'S' modes it will cause your camera to compensate by lowering aperture and/or shutter speed. When ISO goes up less light reaches the sensor.

If you want to optimize sensor exposure when shooting JPEGs, low ISO is the way to go.

You don't necessarily need to over-think exposure if you would rather concentrate on your scene and composition while you're out shooting.

For example, if you like to shoot and edit out-of-camera JPEGs, as I often do with my point-and-shoot camera, you can use a simplistic "ETTR Lite" technique. Shoot using exposure bracketing, then choose the best image for editing. Usually the best choice will be the one that has the right-most histogram without blown highlights.

For even better results you can bracket for exposure and shoot RAW+JPEG (assuming your camera supports it). That way you'll have RAW files available in case you want them. Importantly, the best-exposed image for RAW editing will likely be different from the best-exposed JPEG file. This strange-sounding circumstance is a by-product of ETTR that's explained below.

An inexpensive program called FastRawViewer will help you determine which RAW exposure is the best among your bracketed shots. FastRawViewer does this by displaying a histogram from the RAW file "as the camera captured it" rather than the histogram of embedded JPEG in the RAW file.

If you only shoot JPEGs now but think you might start processing RAWs some day, consider shooting bracketed RAW+JPEG and storing the RAWs for future editing.

By shooting RAW+ETTR You can take advantage of the flexibility provided by your RAW conversion software and reap extra benefits.

RAW+ETTR shooting technique varies from camera to camera. You can do it using any currently-available camera that saves RAW image files. Some cameras can even automate it to some degree. Learn how by consulting the Resources links below and experimenting with your camera.

Shooting RAW+ETTR will cause a scene with wide dynamic range to result in a dark JPEG image (apparent underexposure). Conversely, a scene with narrow dynamic range will result in in a bright JPEG image (apparent overexposure). This darkness or brightness can be corrected in post-processing because RAW data, with its greater bit-depth, contains more information to work with.

Brightness can even be applied selectively, meaning dark and light areas of the image can have different amounts of brightness-correction applied to them. The result is an image that cannot be achieved by shooting JPEG.

In practice, optimizing exposure to the sensor doesn't always result in higher image quality. Even when it does, the image may not have higher aesthetic value.

Most lenses have a "sweet spot" aperture range where their optical characteristics are most favorable. These characteristics include aberrations, vignetting, sharpness, contrast, detail and tonality, resistance to flare, and other characteristics.

You may find yourself in a situation where

In other words, exposure is only one thing you are trying to optimize as a photographer.

Exposure decisions require some attention, which can distract your mind away from the scene you are trying to photograph. With practice, ETTR can become second nature. Some types of photography are better suited to ETTR than others.

The important thing to know is: choosing to expose your "one-speed digital film" to more light, to the extent that choice is available, is preferable as long as you make sure important highlights are retained.

exposure to the right (ETTR)
Using camera exposure settings (aperture and shutter speed) at base ISO (your camera's lowest ISO setting that's not "expanded ISO") so the brightest part of your scene is recorded as bright as possible. This causes the histogram of the recorded RAW file to shift as far to the right as possible.

If you do a web search for "ETTR", "image noise", or "exposure and ISO" you'll find articles and discussions that are chock-full of inaccurate information, especially the older ones. These are some links to articles that are useful.

What's that noise? Part one: Shedding some light on the sources of noise
You might be surprised to discover that a lot of the noise in your images doesn't come from your camera at all: it comes from the light you're capturing.

Exposure vs. Brightening
Properly defined, exposure is the amount of light falling per unit area on a sensor: it is determined by the scene luminance, the f-ratio (more properly the t-ratio – the equivalent f-ratio for a lens with 100% transmittance), and the shutter speed. Note that ISO does not figure in this definition. Let us see why.

Exposing to the Right Explained
One method of aiming for a proper ETTR image is to take a photo, then analyze its histogram in-camera. If none of the histogram is bunching up against the right, you can increase the exposure. Stop increasing the exposure once the histogram says that your highlights are blown-out to white, and you’re good.

Detailed article about ETTR by gollywop:

ETTR Exposed: Digital Photography Review
There are several ways to achieve ETTR, which are described here. Not all are available for every camera, but at least one of the methods will apply to just about any camera.

ISO Invariance: What it is, and which cameras are ISO-less
Another reason why you’d want to shoot an image at base ISO and brighten later is when you are concerned about preserving highlight detail.

"ISO invariance" explained by Ben Long in a video:

Understanding ISO-less cameras
What's cool about this feature though, is what it allows me to do in post-production.