This page is about my experiences with an LG Optimus F6 MS500 phone from Metro PCS, a no-contract subsidiary of T-Mobile. I spent some hours with the F6 learning how to make it "better than new" by rooting, de-bloating, and otherwise optimizing it.

TL;DR: It's a good little phone with storage-space limitations. Rooting it and removing factory-installed "trialware" improves the phone significantly. For the money (under $100 used in good condition) it's hard to beat.

(Skip to the root-and-debloat procedure.)

I discovered this particular phone because I know an "enthusiastic phone consumer" who got one and loves hers. She told me it's perfect for her -- even better than her former phones -- and there are some nice handsets on her former-phones list (Galaxy Note, iPhone 5, Galaxy S3, and others). Sometimes less is more. 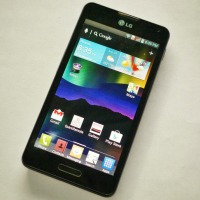 My main purpose for this project was figuring out how to optimize and enhance the Optimus F6 by rooting it and removing some "trialware" and other unwanted factory-installed software. In the end the phone will be set up "clean, lean and mean", ready to be enjoyed by someone with little to no Android smartphone experience.

Some benefits of rooting and de-bloating:

I found a used F6 in good condition and bought it for $70. The owner called Metro PCS and got the unlock code. He said the call took a half-hour. The code arrived in his email after a day or two for processing the request.

About the F6 (mini review)

The LG Optimus F6 is a well-designed phone with some features that are above its middle-tier class. The 4.5" IPS display looks nice, with good color and wide viewing angles. It has a reasonably powerful (1200 MHz) dual-core CPU and a high-capacity (2460 mAh) battery. The phone is slim (0.40 inch thick) and comfortable to hold.

LG provides a good 1.2 amp travel charger with the phone. It charges the phone quickly. I liked the charger so much I ordered another one to use with my other devices when two amps is too much but one amp is not quite enough.

One weakness might be the camera, particularly in low light. Still, the camera could be an Instagrammer's delight. You can program the QuickButton to be a camera button so it turns on the camera, then acts as a shutter button(!). LG's camera app is pretty good too. I like the helpful "Time Catch Shot" and "Cheese Shutter" features in particular. If you're creative and willing to get familiar with it, the camera can produce some great shots.

My phone-enthusiast friend had hers almost full without installing many apps. Rooting and de-bloating this phone will help make it a much more useful device to own. For even more storage space, an enthusiast can specially prepare an SD card and use an app called Link2SD and a App2External_SD mod to get around the storage space limitation.

Note: This is an updated procedure using TWRP Recovery rather than CWM and F6Utilities. This new procedure is shorter than the original, too, without a Lightly-Debloated Baseline stop along the way. I archived the first procedure so you can read it if you're interested.

Our starting point is a factory-fresh installation of "12b" firmware. Find your phone's firmware version with

Note: In my case got to this "reference" starting point by flashing a .kdz file I downloaded from LG's site. You'll find directions at GameTheory's site. If you do flash the .kdz, remember to remove your SD card first, otherwise it will be reformatted. Also, have some patience because it takes some time to move that much data through a USB cable.

Next set up Wi-Fi using the Setup Wizard, which is the app with a magicians-hat icon and labeled "Setup".

Now prepare for the root.

While we're at it, let's see how much space is free with all of the bloatware installed (but not updated).

Note: I have the .apk Android package files on the SD. Sideloading makes it easier and faster. It also allows me to avoid attaching my Google account to the phone over and over while I experiment. I used the Towel Root .apk linked here and TWRP Recovery .apk linked here.

My 16GB class-6 microSD had these files on it to start with:

Install the .apk apps using File Manager. Navigate to its location on "external_SD", choose the app, then choose "Package Installer".

The system reboots into TWRP Recovery. Now's a good time to do a nandroid backup.

Titanium Backup ("TB") is a powerful backup program that can safely uninstall apps. Any uninstalled app can be easily restored if necessary.

Install TB on the Bloated Base system and do a Full backup.

Titanium Backup is not extraordinarily user friendly until you get accustomed to it. First move the backup location to the SD card because otherwise TB will put its backup folder in /storage/sdcard0/ (on the phones' built-in storage space) by default.

Next do a full backup using a "batch action".

Hit the green checkmark. It takes a while for the backup to complete. Note: You may want to un-check "Wi-Fi Access Points" to keep SSID credentials from being archived.

What we'd like to achieve now is a configured baseline nandroid backup that can be restored and used to "start over".

Using AppDrawer - Edit you can see which bundled apps can be uninstalled even without root. Uninstall those and a few more that aren't normally able to be uninstalled.

There are some Google apps we don't need in the baseline taking up lots of valuable space. They can be downloaded from the play store if someone wants one of them.

And some installers can go.

Use Titanium Backup to uninstall the apps.

I clear the data before uninstalling each app, but that's not necessary.

After that we can get a "settled-in".

Add widgets and an app to the screen to the right of the main Home screen.

Remove the Mobile Hotspot "upsell" icon and add Calendar (Month) widget to the screen to the left of the main Home screen.

See how much space is free now with some apps removed.

Chances are now that you've done all this work to get your phone optimized you don't want an over-the-air System Update to come along and overwrite your work.

One way to ensure that doesn't happen is to disable the System Update Service.

Back Up the De-bloated Baseline

Note: Before doing this nandroid backup, you may want to forget the Wi-Fi SSID first so it won't be part of the baseline backup. You may also want to disable Unknown sources and USB debugging.

We need a way to get into Recovery, so install Quick Boot.

Test it by booting into recovery. Grant root permissions when prompted.

From recovery, do a nandroid backup of the baseline system with TB installed and configured.

From Anywhere to Baseline

If the phone gets twisted up and you want to get back to the rock-solid debloated baseline, here are the steps:

The reason this happens is because apps that come with the system are installed by LG in the /system/ directory. When these apps are updated by Google Play, the updated version doesn't install in /system/, it installs onto our precious 1.27GB of Internal Storage space (in /data/).

Visit the Play Store for the first time and let updates be applied. When asked, I choose not to keep this device backed up with my Google account.

After Play Store updates are done our 1.12GB of storage space has become smaller because available space is occupied taken by these now-updated Google apps:

After Play Store updates are done our 1.12GB of storage space has become 855MB. Google apps are taking 265MB of space -- *much* less than they would have without the de-bloat.

Some Google apps aren't updated yet. If and when they update they'll use some Internal Storage space too.

Another benefit of de-bloating is improved RAM usage. The phone now boots with 444MB of RAM used (362MB after a clear with the widget). Pretty good!

I briefly tried removing some more apps with an eye toward privacy and a potential . The phone worked fine for the short time I had it this way. Here are the apps I removed using Titanium Backup:

This time after Play Store updates are done our 1.12GB of storage space has become 956MB. 134MB appears to have been taken by these Google apps:

These two Google apps aren't updated yet so they'll use some Internal Storage if they update.

The phone now boots with 434MB of RAM used, 345MB after a clear with the Task Manager widget.

If we replace Email with K9 Mail and File Browser with B1 Archiver there's still plenty of space left (936GB).

Here are a few recommended apps you might want to install on your freshly-deployed LG Optimus F6. If you use and enjoy these free apps, consider giving them 5-star ratings in the Play Store to encourage more apps like these.

Everybody needs a flashlight widget, and there's a good one with reasonable permissions: Flashlight Widget by Nikolas von Randow.

The built-in file manager is useful but has way more permissions than a file manager needs. Remove it with Titanium Backup and replace it with B1 Free Archiver by Catalina Group Ltd..

It helps to have an alternative browser. This one works on limited resources and can put its cache files on the SD card: Dolphin Browser® Mini by Dolphin Browser

The LG Tasks app was an easy pick for removal. If you want a minimalist app to help you Get Things Done, give this one a try: Simpletask Cloudless by Mark Janssen

If you like to stay up on the news and know how to find RSS feeds put them in this simple-and-effective RSS-reader app: SimpleNews RSS Reader by Daniel Langerenken

Everybody likes good wallpaper. For years my go-to site for wallpaper has been Vladstudio.

Here are some good ones to get you started:

Unlocking is pretty easy. If the phone has been used for three months or more, Metro PCS will give you the unlock code. It's a "service provider" unlock code, meaning the phone is restricted to using Metro PCS as a service provider until it's unlocked. Once unlocked, it will work for T-Mobile, AT&T or MVNO providers who use their GSM networks.

I put my AT&T SIM into the phone a turned it on, then used the phone dialer to enter 2945#*500#. From the menu I selected service provider unlock and entered the code that Metro PCS provided.